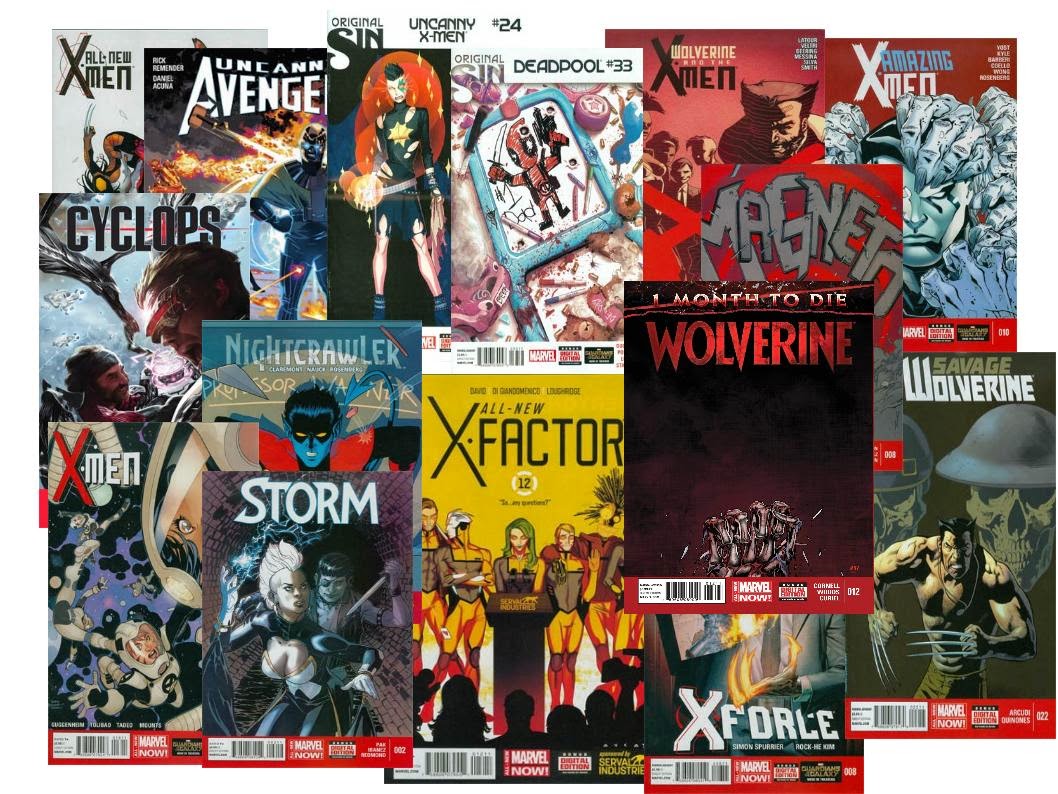 Because the conversation and rumors surrounding Marvel's plans for the X-Men don't seem to be going away (this was posted on Tom Breevort's Tumblr page today), I thought I'd add my two cents...

Fourteen. That is the number of current ongoing Marvel titles featuring the X-Men, a subset of X-Men, or a solo series for a character from the X-Men. Add in Specials, Annuals, One-Shots, and mini-series and your total cost for X-titles will be over $60 per month. To be fair, the Avengers titles do have more ongoings if you count anyone who's been an Avenger. Though almost everyone has been an Avenger at some point in their superhero career.

When I started collecting, I typically bought three to four titles a week. At the time, there were only four in continuity X-books: Uncanny X-Men, X-Men, X-Factor, and X-Force. So each week I got my one X-book and had enough money left to pick up some other titles.  Maybe it was Captain America, Batman, Wonder Woman. The next week I'd pick up another X-book and two or three others. Maybe this time it was Spawn and Moon Knight.

For those of us that enjoy the shared universe and like to follow all of the storylines for our favorite characters, this is almost impossible today. If comic book pricing suddenly dropped by 50%, I might be able to manage it. However, the number of titles in each family today means I need to make a choice.  I can either read all the X-books and their solo titles or give up on some continuity and pick up a few other series. Talk to DC readers and you'll hear the same complaint about the Batman family of titles.

This is one of the primary factors for low sales of B and C list characters. I'd love to pick up an issue of All New Ghost Rider or Elektra as I've heard these are fantastic series. There's just no room on my pull list to get these books if I'm interested in continuity for my favorites. I've read the first four issues of Dan Slott's Silver Surfer. It's not for everyone, but I loved it. Unfortunately, I don't have the budget to add it. So this progression follows; consumers with limited budgets trying to keep up with continuity or crossover storylines leads to low sales of B and C list characters which leads to cancellations which leads ultimately to less familiarity with these characters.

Here's where that will come back to bite Marvel and DC. Eventually, an actor's contract runs out (already seeing this with Robert Downey Jr and Chris Evans) or an actor will get older (Anthony Hopkins can't possibly live as long as the All-Father, Odin). This means that film franchises will end and they'll need to replace it with a new franchise. People flocked to see Avengers because they'd been waiting almost 50 years for someone to make that movie. However, in my opinion, the Guardians of the Galaxy success is a bit of a fluke. Yes, Marvel Studios did everything to make it a success: perfect director for the film, the perfect ensemble cast, and fantastic marketing. What's not obvious to most people who saw that film is that incredible source material already existed to base that script on.  If Dan Abnett and Andy Lanning hadn't had an opportunity to create their stellar series in 2008, that film wouldn't have been possible. Will there be similar recent material for Inhumans?  Not if Charles Soule's series doesn't start selling better. It should be selling better because it's very good.

Armchair quarterbacking here, but if I had any sway at Marvel I'd be slowly reducing the number of titles in each family. This would leave room in comic buyers budgets for a new Black Panther or Dr. Strange series or the current Inhuman series. With all of the rumors swirling behind the outcomes of Axis and Time Runs Out and a possible refresh of the Marvel Universe, maybe this is already underway.
Posted by Brian Michael Cassity